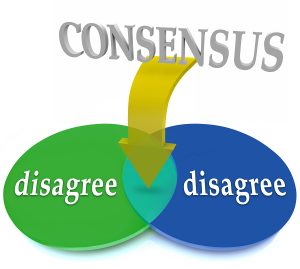 As you have perused our website, you have been treated to several blogs about consensus building. What is it? What isn’t it? How do we achieve it? Why does it take so much time? What are some specific techniques to help you and your group gain consensus?

Let’s assume that you have worked through the issues and have come up with a series of questions or proposals. Give everyone three pieces of paper – red, yellow, green. Pose the first question and ask people to hold up the color paper that signifies how they feel:

Once the cards are raised, everyone has an immediate visual of where the group stands. The facilitator or chair asks each person holding up a red card, “What would you need in order to become a yellow or green card?” You might also ask the “greens” why they agree or why they have what they need.

Next, find out if the discussion provided insights that might help people move from red. Ask for a show of cards again. If red cards are still held, then ask for modifications of the proposal. Ask for a show of cards once more. This time you may find the reds have turned to yellow or green. You may also find that some of the greens have now changed.

If you still have red cards, which assumes no consensus, you will need to document the reasons. One thing to remember: consensus building doesn’t mean reaching unanimity. The group has not failed. They have grown in their understanding for other points of view.

An example may help. The Texas Legislature passed a bill to fund the scientific study of the environmental health of the eight river/basin/estuary systems in the state. Once the river system’s health was scientifically determined, a group of 25 stakeholders representing a cross- section of water providers and users for that system would study the results and make recommendations as to how to best balance human needs with environmental needs. For example, the City of San Antonio supplies drinking water from the San Antonio and Guadalupe Rivers system to more than 1 million people. The expected population increase will require the city to build an off-channel reservoir sometime in the future. To what extent will the environmental health of the river be affected by the new reservoir?

The Stakeholder Advisory Committee agreed to work on consensus building on their recommendations. Ten separate decisions were needed on each of the 16 river gauges. The stakeholders were overwhelmed. The red, yellow, green card technique was used to help them make these decisions. Consensus was achieved on 15 of the gauges. In the final report ,the reasoning and concerns for the 16th gauge for which consensus wasn’t achieved was fully explained.