Environmental Justice: Where Are We Headed? 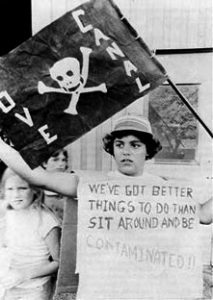 Much of our public engagement practice over the decades has been woven into environmental reviews and issues. The recent spate of Executive Orders from the new White House have reminded me of one of my favorite hit oldies, Environmental Justice, or EJ for short. What a great concept – Justice. Who could argue against that? Environmental. Well, now, that’s a different story…

As an environmental planner (Environmental Planning) I’m in favor of things that protect people and the world of which we are a part. And by the way, I grew up near Love Canal. And spent my summers in the Adirondacks, watching the trees die from “acid rain” deposits. And maybe I even got sprayed with DDT while eating my school lunch.

Protecting people’s health and the environment means Regulations. While that is a dirty word to many, history sadly tells us that big corporations, developers, and other profit-oriented folks just don’t like to volunteer to do things right if it costs them any time or money.

Protecting the wonders of the natural world from human pillage is a relatively new idea for us in America, but over the last century the concept has become ingrained in our national consciousness. (See A Fierce Green Fire for a history of the environmental movement.) In the 1990s, a new consciousness emerged that a whole lot of the damage done had been done to people with the fewest resources to fight back: poor folks, minority communities, sparse rural areas. So President Clinton issued an Executive Order (Executive Order 12898) requiring that everybody who proposed anything regulated by the federal government must evaluate whether their project would have “disproportionately high” impacts on at-risk communities; this is what we call environmental justice. Implementation of it has had its ups and downs over the years (20th Anniversary of EJ Executive Order) but it remains an important element of the U.S. Environmental Protection Agency’s (EPA) regulatory pantheon.

One can’t help but wonder where this, and all other environmental protection initiatives, are headed now in the current federal administration. The 29 Executive Orders and Presidential Memoranda that have been issued by the new president in six weeks since taking office can be found here: https://www.whitehouse.gov/briefing-room/presidential-actions/executive-orders. Of these, one-third are directly aimed at eliminating regulations in general and specifically overriding environmental oversight for infrastructure, manufacturing, the Keystone XL pipeline, the Dakota Access pipeline, and ‘waters of the United States’. The appointed head of the EPA was an avowed opponent of the EPA in his previous career. There is now talk in Congress of eliminating the EPA as an agency (moves to abolish EPA).

Under these conditions, the concept of environmental justice may no longer be limited to at-risk communities. Everyone in the country would be affected by the dismantling of environmental protections that have been developed since the Nixon administration. For a graphic illustration of what things were like before that, check out some of the historical footage in this fine production from PBS’s American Experience: Rachel Carson and Silent Spring.

I won’t be offended if you want to call me a tree-hugger. In fact, it would make me proud. Those who first inhabited this continent held, and still hold, with the belief that we must consider the consequences of our actions far into the future (7th Generation Principle). I’m with them. A healthy planet for All. Justice for All.