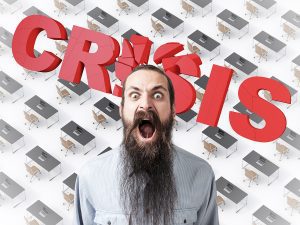 The thesis of this article is that the best, most effective crisis management team is You. And your neighbors and your community. Us. The Tribe.

About a year ago, I read Sebastian Junger’s wonderful book, Tribe: On Homecoming and Belonging, and I’ve been thinking about it ever since. What an evocative concept … tribe. A dictionary defines it as “any aggregate of people united by ties of descent from a common ancestor, community of customs and traditions, adherence to the same leaders, etc.”

The key word here is community. More than a place to live, community is an essential element of human survival. While we’ve gotten away from the small, tight-knit communities of the Pilgrims, the concept still holds in many ways. If we don’t band together in the face of hardships and threats, we won’t make it. Simply put, we can’t survive without each other. And this is as true today as it was at the dawn of mankind.

But ‘progress’, technology, and an increasingly diverse and isolated society pose significant challenges to the concept and structure of communities. We must work increasingly harder to connect with others in a meaningful way and, interestingly, these connections (or lack of them) tend to surface most prominently in times of crisis.

Junger’s analysis focuses on homecoming soldiers trying to re-integrate into a world that they now find lacks the cohesion, brotherhood, and support they got in (yes) War! An undertaking that allowed them to demonstrate their valor, work cooperatively, and show selflessness. The brutal break from this band of brothers into a society that is unsympathetic and preoccupied with other concerns is suggested as a major reason for the exponential increase in post-traumatic stress disorder.

As Jennifer Senior wrote in her New York Times review of Tribe, “Mr. Junger’s premise is simple: Modern civilization may be swell, giving us unimaginable autonomy and material bounty. But it has also deprived us of the psychologically invaluable sense of community and interdependence that we hominids enjoyed for millions of years. It is only during moments of great adversity that we come together and enjoy that kind of fellowship — which may explain why, paradoxically, we thrive during those moments.”

The importance of tribes with relation to a crisis management team is also manifestly displayed in countless stories of human crisis and natural disasters. Here are a couple of examples:

In 2011, Japan was hit with a horrific earthquake, followed by a devastating tsunami, followed by the meltdown of a nuclear power plant. Daniel P. Aldrich, a professor in Tokyo at the time, conducted a research study of more than 130 cities and villages to try and figure out why the mortality rate from the tsunami varied tremendously (In Disaster Recovery, Social Networks Matter More Than Bottled Water). The conclusion: “municipalities which had higher levels of trust and interaction had lower mortality levels after we controlled for all … confounding factors. The kind of social tie that mattered here was horizontal, between town residents.” In other words, Tribes Save Lives. Aldrich observes that the Tohoku disasters reinforce past evidence about the importance of social networks and social capital in disaster recovery around the world.

Our most memorable American disaster experience in recent times was Hurricane Katrina. We’ve all seen coverage of ordinary people, neighbors, in New Orleans rescuing folks, evacuating hospitals, rebuilding their communities, and never giving up the fight. My partner and I had the sublime experience of helping to facilitate a conversation to develop a United New Orleans Plan in which more than 3,000 current residents and displaced people participated, all at the same time. This is an engaged community with lots of social networks and love of place! A study by the Robert Wood Johnson Foundation (What Hurricane Katrina Taught Us About Community Resilience) notes that the paradigm of recovery has shifted from infrastructure development to community action. Recent natural disasters and health pandemics “have taught us that to be truly prepared for the long-term impact of adversity, communities must develop a different set of assets: those that build strength through promoting well-being and community engagement.”

In a sad contrast to these crisis management efforts stands Haiti, which has spent 7 years trying to recover from the catastrophic 2010 earthquake (Millions Still Need Aid). After expenditures of $13.5 billion in humanitarian aid (Where Did the Money Go?), the nation is still in shambles.

What’s the difference between these portraits? For one thing, although the resources marshaled in Haiti represented probably the largest relief effort ever undertaken, involving hundreds of military and civilian organizations from around the globe, the frameworks for delivering assistance were all ‘top-down’, with little or no attempt to partner with local agencies, groups, or people. This resulted in confusion, mistrust, disorganization, and delivery failures on a grand scale. To be fair, the probable reason things happened this way is that Haiti, after decades (centuries) of dictatorships, political chaos, and economic devastation, simply does not have what it takes to build a grassroots crisis management team: a history of community involvement, self-reliance, connectedness, trust, stocks of ‘social capital’ and – the new watchword – resilience. The question of how these characteristics directly relate to democracies, versus autocracies, is a topic for another day…

The point is that, where they exist, research has shown time and again that recovery outcomes can be greatly improved. This applies to recovery of communities after disasters and, equally, to recovery of soldiers of war when they come home.

The good news is that there are many tools available to foster horizontal and vertical community connections. For two thoughtful insights into this phenomenon, see How to Help Your Community Recover From Disaster: A Manual for Planning & Action (Society for Community Research & Action) and the Rand Corporation/Louisiana State University study, downloadable from here: The Role of Community in Disaster Response. And, thankfully for Haiti, Oxfam International is working to build this human infrastructure with new programs that highlight creation of inclusive processes to ensure the participation of Haitian civil society organizations, communities, and citizens.

At TPC, our motto is “We’re Better Together”. The non-profit Cities of Service knows this. They’re funding VISTA volunteers to run Resilience AmeriCorps programs in 10 cities to integrate citizens into emergency management. Guess what Boulder calls theirs? Better Together.