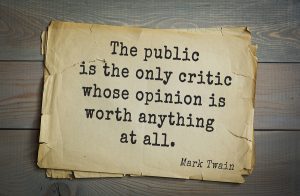 Election winners frequently tout their success as a mandate to do as they choose, suggesting that they have been ordained to represent and act on overwhelming public opinion. This is generally the argument regardless of the winning party and it’s generally wrong.

I have to think that this is something that the authors of the National Environmental Policy Act (NEPA) in 1969 sought to address when they required that the affected public have a say in decisions by federal agencies. Prior to NEPA, government agencies typically did the bidding of those in power at the moment, without much additional public interference.

Step forward to our current state of affairs. The Saturday after the inauguration brought an estimated 650 different women’s marches involving millions around the world. Some called it the largest public protest in history.

A story in the Huffington Post said, Those marches, after all, had not been sparked by Planned Parenthood, or the Democratic Party, or unions, or MoveOn.org, even if they did pitch in to help once it got going. Instead, they came from regular, angry people ― people who may try to replace the ones in power – referring to the current Democratic Party leadership.

Public trust in almost every institution and organization, including political parties, is in the tank and it’s been eroding for years. How is public opinion measured? Probably not by who’s in power at the moment.

They showed up on the day after the January inauguration, at airports to protest President Trump’s immigration executive order and again at Berkley in a demonstration that turned disturbingly violent.