The Town Hall Meeting Format is on Life Support 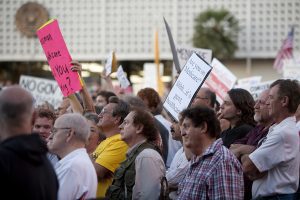 The Town Hall Meeting format will need to be thrown on the scrap heap for the next four years. It’s deadly if you’re trying to control the message and this President and this congress clearly need to control their messages. In their defense, controlling messages and the public narrative is something that almost everyone in control likes and tries to do, but with the current administration, we’re entering a whole new territory.

With congress in recess, news has focused on the public train wrecks conducted by our various congress-people in the form of local town hall meetings. These events aren’t working well for our elected officials the way the current Town Hall Meeting format is structured, so they’re pushing back hard, saying that the events simply provide a forum for their opponents and paid protestors to embarrass them in public.

So their answer is to go dark, get away, hunker down, forward the phones to voicemail, make their staffers handle the “crazies.” The U.S. State Department has stopped its daily press briefings for the first time since the 1950s, deferring to the White House for any foreign policy news. In one state recently, legislators simply reduced the time and opportunity for oppositional citizens to speak during “public hearings” on controversial bills that had, in effect, already been decided. Bills across the country are being introduced to increase penalties on protestors; one bill would charge protesters for the cost of law enforcement during demonstrations, and in at least one case, would stop holding motorists liable for negligently running over someone obstructing a roadway. All of these strategies will help control the message, limit any dialogue, and make sure that the story is told correctly.

It’s not news to know that people who have power and influence tend to want to keep it and are reluctant to give it up or give their critics much influence over that power. What’s new in 2017 is exactly how far those now in power will be allowed to go to keep their power. And I’m pretty confident that hosting town hall meetings isn’t part of the plan.