How are consensus decisions developed?

Consensus becomes possible within groups that are committed to honoring each person’s contribution. The collaborative problem solving process involves a shared commitment to listen 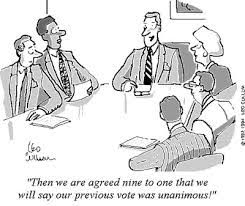 respectfully to each other and the choice to allow each unique perspective to inform the whole view. A consensus-building group will make a deliberate effort to find and build upon what is shared. Respectful dialogue and careful deliberation allow everyone to bring their ideas to the table. Trained facilitators design and manage collaborative problem solving processes to help a group of people consider all aspects of a problem and potential solutions before moving forward. Those who think differently are provided the chance to be heard. Sometimes people just want to see an idea given consideration. Adding an alternative to the list of options being evaluated may make those individuals feel their perspectives and concerns have been acknowledged. Similarly, adding a criterion to reflect specific concerns will help people come on board.

What can be done if consensus proves elusive?

There are options available to help a group struggling to find consensus, including:

Is consensus ever the wrong approach?

Consensus may not be necessary. If a meeting sponsor is expecting to use a group of people as a sounding board (at the Consult level of the International Associate for Public Participation’s Spectrum, for example), consensus may not be necessary or even helpful. For example, if a key perspective is not present at the session, portraying the results of the session as a consensus product could cause more harm than good.

Who decides when to try for consensus? A choice to try for consensus through collaborative problem solving should be deliberate on the part of the group. Facilitators will often recommend agreement on a back-up decision making process as well. Interestingly, once committed to the concept, few groups fail.