What is consensus decision making?

Consensus is one way that groups can make decisions. There are other ways, of course. A conceptual range of options is depicted graphically below. It spans from one person making a decision on behalf of the entire group to consensus with no constraints, meaning that the group will take whatever steps are needed for full agreement to be achieved. One axis represents the increasing degree of participation that people have in the decision-making process. The other axis depicts the increasing degree of support those individuals will feel for the final decision. Not surprisingly, the greater the degree of participation, the greater the degree of support one feels for the final decision. As depicted on the graph, developing consensus takes more time than decisions that require a smaller proportion of proponents. 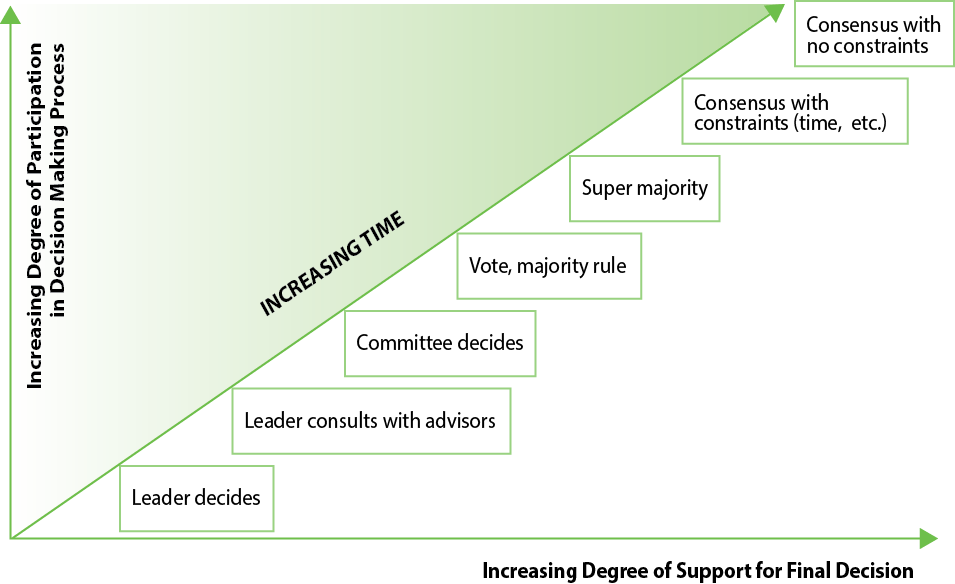 Because reaching consensus can be time consuming, groups that want to try for consensus often agree to define a set of constraints as a practical matter. For example, a group may say, “We would like to reach consensus, but we only have two months before we have to move forward. We will do our best to reach consensus in that two months, but if we can’t get everyone on board, we will go with the choice that makes the most people happy.”

What Does Consensus Mean?

How is consensus defined?

Any group wanting to develop consensus should first agree on how they will define it. Consensus is typically defined as “Everyone understands and will support the final decision.” Interestingly, that definition does not require unanimity, but it does require that everyone agree not to sabotage or speak out in opposition to the decision after the fact. Generally people will not agree to support a decision if they don’t understand it and therein lies the secret to consensus decision making. Much of the effort needed to generate consensus comes in developing a shared understanding the issue(s) being addressed, the options available, and the criteria that should be considered. Consensus is not just the end point. Indeed, the more important effort is the process leading up to a decision. Groups committed to consensus decision making often start from what is already shared and build agreement from that point. In other words, consensus is built through collaborative processes. It does not just happen.

Why is consensus desirable?

In democracies, we often think a majority vote is good enough. But anyone who has supported an outcome only to lose with 49% of the vote knows how unsatisfying that can be. More importantly, a simple majority is vulnerable. If only 2% of the total change their minds, the outcome can be radically different. That is why we sometimes choose a higher bar, requiring a super majority of 2/3 or even higher. For large groups, decisions made through voting processes can still lead to a decision that disappoints a lot of people.

If you’re having a difficult time getting participation in consensus decision making, try using the information in this free download:

We use Skill Sheets like this one in our training sessions. If you’d like to know more, please check them out now.

The concept of consensus is premised on a belief that each person has something of value to contribute to the decision-making process. The process recognizes that each person has a piece of the truth and the whole truth reflects all of the separate contributions. A group that chooses to work by consensus agrees that all perspectives are worthy of consideration and focuses its time and energy on building a decision that will work for the group as a whole. When one person holds out, stating that he or she cannot yet support the outcome, the rest step back and respectfully consider how to address that person’s concerns.

Often, the result of a consensus-building process is an agreement to something that no single person envisioned before. The product is greater than the sum of the parts and the result reflects everyone’s input. The impact of a consensus decision can be profound. Particularly if a diverse group of stakeholders can reach agreement and are committed to standing together behind that agreement, their accomplishment can be hard to dismiss.