If you’re at all familiar with the International Association of Public Participation (IAP2) Public Participation Spectrum, you know that the listed range of public influence level categories begins with ‘Inform’. And if you learned about the Spectrum from a licensed IAP2 instructor, you should also have learned that just ‘informing’ people, in and of itself, is not truly public involvement, but it’s there for an important reason.

What Does It Mean, to Inform?

If you’re just informing people you’re providing them with facts, perhaps important things for them to know, or … whatever, but if they have no way of actually influencing what you might do and how you might do it, it’s not really public involvement, participation or engagement; it’s public information and that’s ok. Just don’t suggest to people that by you informing them that they will somehow influence the decision when you know they won’t; that’s misleading. They’ll likely know it, or figure it out, and your insincerity will piss them off, make them even less trusting of you in the future and will further exacerbate their anger and the cycle of public vs. institutional conflict that we’re all enjoying so much today.

Lemme be clear; there’s nothing at all wrong with informing people; I’m most certainly not suggesting that there is. Public information is a critically important and a most honorable thing to do. In fact, I’m confident that most of the work that you do falls into the category of informing people and I greatly admire the skilled people who do it well. And by the way, having been a paid practitioner of both relations and information I would suggest that public service institutions should be in the business of public information and not public relations, which implies something that public service organizations don’t need. (I’m sure I’ll be hearing from my PR pals about this … so I’ll meet you for a beer and you may rebut.)

The issue is that some folks are now urging IAP2 to drop the Inform level from its 20-year-old, globally respected Spectrum, claiming that it’s, somehow … disingenuous? To this I call, “bull-cookies”.

We Need to Inform Ourselves

It’s important to understand what it is, what it isn’t, and why it belongs there. Engaging people has to start with informing them. It’s the indispensable first step to … well, everything! People can’t – and probably won’t – be willing to participate without a level of knowledge, and dropping the ‘Inform’ level would suggest it’s somehow not that important to the other levels. But it’s paramount and it needs to be there. When I (and at least a few of my other trainer colleagues) teach a class or facilitate a workshop that explains the levels of the Spectrum, I always suggest that students put an imaginary, grey vertical line between the Inform and Consult levels to remind them that informing people is vital but not truly public involvement, which requires the existence of some level of public influence. So perhaps instead of that imaginary grey bar, IAP2 might consider actually adding a real one to the IAP2 graphic in an updated and slightly improved version of the IAP2 Spectrum. Hint, hint. 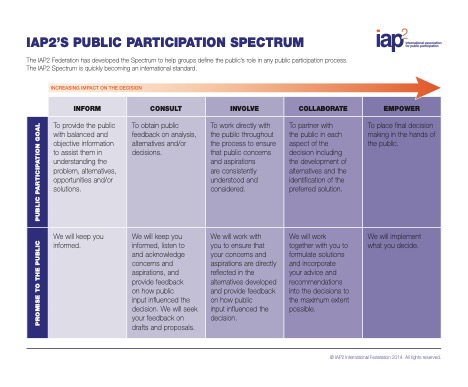 This particular blog is clearly for the somewhat serious aficionados and active practitioners of authentic public participation. Click on IAP2.org, IAP2USA.org or TheParticipationCompany.com for more information.

1 thought on “Inside IAP2 Baseball”