Our managing pardner Debra Duerr has some personal thoughts on the role of a citizen. 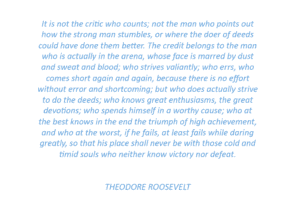 on every project – the person with boundless energy who resisted, shouted, provoked, forced a different way of thinking, and ultimately created a better solution. We have respect and affection for these folks, who prove that one voice can make a difference.

Tragically, we lost one of these unforgettable people to COVID-19 last month. He was a member of a long-standing community working group I support in a town facing the huge impacts, good and bad, from development of what will be one of the largest copper mines in the world. This man was a community leader for most of his life and took on all the tough issues with a vengeance. He never let up; he constantly irritated everyone; he held ideological values about the environment and what constitutes public good; and he expressed radical opinions about most of it. He developed provocative strategies and tactics to fight his battles as well as forged partnerships with those who could advance his cause. And he never stopped believing that his town could succeed in reinventing itself if people would exercise their creativity and independence from the global corporations that had dominated the region for a century. In short, he was the model citizen activist.

Let’s think about what that means …”Citizen” in its purest context is the child of a place, a culture, that nurtures and creates him/her/them – not a politicized distinction between those who belong and those who don’t, as it’s come to be used. “Activist” is someone who DOES SOMETHING. Think of the courage, energy, determination, and hope it takes to DO SOMETHING … Especially in today’s social and political atmosphere, it’s so easy to lose all of these qualities and succumb to despair, numbness, and excuses. To sit and watch the world happen on TV, thinking, “Gee, I should do something, but it’s so inconvenient. And even if I try, it won’t do any good. Things that are happening are too big for one person to influence.”

But in our hearts, we know that’s not true. My favorite quote comes from the great cultural anthropologist Margaret Mead: “Never doubt that a small group of thoughtful, committed citizens can change the world. Indeed, it’s the only thing that ever has.”

So, through the sadness on the loss of my friend, I’m inspired to DO SOMETHING. How about you? – Debra Duerr