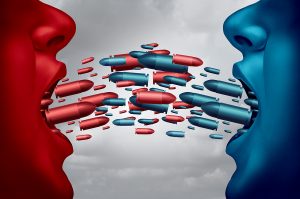 Dictionary definitions of conflict vary with the dictionary, some including references to war to others that reference the more mundane incompatibility. Conflict resolution and dispute resolution are often used interchangeably, but disputes are more typically defined as something a little less serious than conflicts, or at least something that’s more short term and more easily resolved.

People sometimes use one term or the other depending on how they might be trying to “spin” the situation. But regardless of which term you’re fond of using the most, the point is that people don’t always agree–which results in disputes or conflicts.

Dispute resolution specialists come in all stripes and academic credentials that typically tend to match the subject area of the dispute. So in the case of specific copyright law, lawyers mediate most of those two-party kinds of legal disputes. But for most other complex, multi-party disputes that are grounded in sides that mistrust the intentions of each other and just want what each thinks is fair, law doesn’t rule the conversation. That’s where another dispute resolution specialty area comes into play.

Disputes among people who are able and willing to focus on facts, data and their differing opinions about those facts can usually be smoothly facilitated to a resolution. A good facilitator can usually nudge people to step back and then help them do a little joint fact re-finding. Sometimes one group of people benefits from having more information about the issue or another group has the disadvantage of having less or contrary information about the situation or the facts. Those kinds of conflicts can usually be resolved if a facilitator can even the “information playing field.”

The toughest disputes require the process to start well before you even ask people to come together to talk.

This level involves the emotional intelligence, human behavioral analysis and skillset to help move people from their emotional state of mind to one in which they’re willing to have a reasoned conversation about the facts.

Working at this level requires different experience and a different facilitation skillset. But it’s one where the thorniest disputes can, in fact, be resolved and where we at TPC choose to focus for our consulting work.